Pannimadai is a village belonging to Perianaickenpalayam Block of Coimbatore District. It is located at 15 kms away from Coimbatore city. There are about two hundred families residing in the village. Among them 50 % of the families belong to landless labourers. Most of the women belonging to landless labourers. During that time the men were employed in companies located nearby. Due to unavoidable situations these employed families became jobless. The family members had to face a very difficult situation without any income to meet their basic requirements. This was the situation during the year 2002.

Among 13 women, 2 women are educated upto 12 th standard. These two women were trained to look after the accounts of the group. The group was functioning successfully for one year.

The training guidance from Krishi Vigyan Kendra and the financial help from the bank had helped the women group to establish a canteen at the Faculty of Engineering College Campus, Pannimadai.

These women group is fully engaged now. Their schedule starts at 7’o Clock in the morning and goes upto 8’o clock in the night. The items made include tiffin varieties like Pongal, poori, idli, dosa andncool drinks and snack varieties are made avialble during lunch, coffee and tea is also supplied.

Everyday about worth of food materials are prepared and sold. It fetches Rs.1000-1500 for each group/every day. On an average each member earn between Rs per month. Krishi Vigyan Kendra’s intervention at right time has helped these women, come out of their economic problem at a very appropriate time.

The canteen is well equipped with grinders, mixers, commercial stores and utensils and two fridges and serving vessels. The institution has provided them with the dining tables and chairs. For this the group pays Rs.6,000/- as rent every month.

Future Plan These women are interested to undergo for their training in preparing varieties of items including fast food preparations. They have plans to further extend their activity by giving training and employment to other women groups. 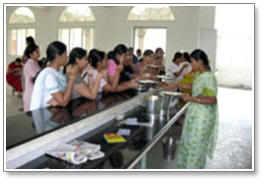 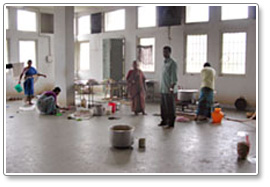